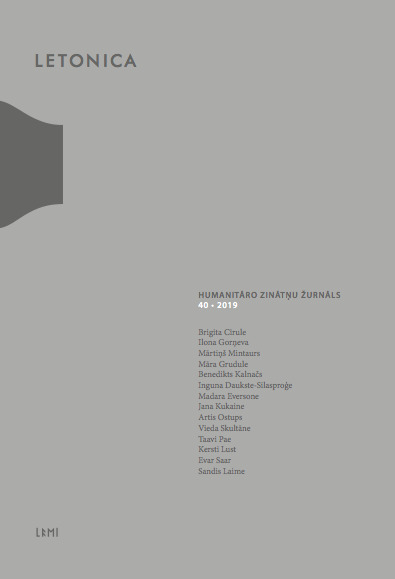 Summary/Abstract: The article focuses on the temporal and ethical aspects of history, trauma, mourning and melancholy in contemporary Latvian fiction. In order to provide the cultural and historical context, where these aspects are crucial, the article examines the shift in Latvian fiction, when a critically and ethically charged examination of Latvian history of the second half of the 20th century emerged. This shift is characterized by authors becoming increasingly aware of the traumatic effect of the past on the present. The article interprets this shift as a tendency inherent to the memory culture and politics in Eastern Europe, revealing the role of literature in representing and creating mnemonic values. What guides the article is the idea that the relations between contemporary Latvian fiction and the trauma of the Soviet occupation can be best understood when mourning and melancholy are viewed as two paradigmatic reactions to tragic past events. Therefore, the article provides an insight in the essence of the phenomena of trauma, mourning and melancholy and their relation with the formal features of the post-Soviet fiction. The manifestations of mourning and melancholy in literature have been conceptualized by analyzing two different models of representation – declaring of trauma (melancholic strategy) and narration of trauma (an attempt to work through trauma by framing it as a story). The first model is represented in Gundega Repše’s novel “Persuasion of Iron” (Dzelzs apvārdošana, 2011), where post-Soviet society is critically addressed, whereas the second model – Nora Ikstena’s novel “Soviet Milk” (Mātes piens, 2015) – offers a return to historical past in order to identify the destructive moments of melancholy during the Soviet occupation that lasted for fifty years. The aim of the comparison is to reveal melancholy and mourning as a mechanism of traumatic reactions in a literary text and to create a conceptual framework that can be applied to interpret the problematic questions of trauma and memory in Latvian literature.