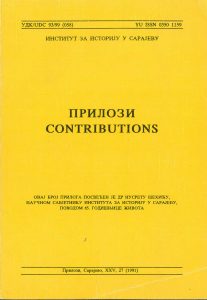 Summary/Abstract: The Serbian educational and cultural society "Prosvjeta" was, as well as the Serbian people on the whole, subject to repression: after the Sarajevo 1914 Assassination, the Sociasty’s activities were suspended and a government official was given authority over its assets; the society’s officials were arrested and the clerks fired from work. For the next six months the relevant political factors in Sarajevo and Vienna debated on the possible legal framework which could justify the drastic measures taken against the Society.