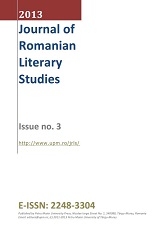 Summary/Abstract: The study investigates the intricate mingling of the Romanian echoes of the Western Counterculture, on the one hand, and the nationalist-Communist ideological elaborations of the Ceauşescu regime, on the other. The perspective is that of the young alternative musicians of the 1970s and the early 1980s, who, confronted with the necessity of constantly adapting to an uncertain and hostile political environment, where simultaneously oscillating between pre- Communist forms of exalting an archetypal national soul and the Western countercultural blend of futuristic and regressive utopias. The manner in which this nexus of tensions could be packaged into a relatively consistent expressive lingo is analyzed through the evolution of the lyrics of the progressive rock act Sfinx/Sphinx.