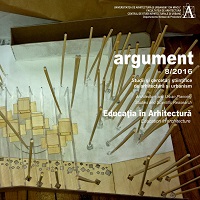 Summary/Abstract: The fifteen post-war years of the Romanian School of Architecture are a time of deep quest, as well as of confusion and loss. They are the sad paradox of both the innovations and education reforms that will eventually warp the School on its whole, shaping it in tune with the newly set up political ideology. The short history of the School, cast during the early 20th century and the inter-war period, becomes more and more scattered in the 50’s; its curriculum is gradually shaped after the Soviet paradigm, discharging important traditional lectures, such as Art History, History of World Architecture, Byzantine Architecture etc., while focusing instead on the industrial, agrarian and massive urban planning programmes. In the same time, the academic curriculum is shaped into 6 years of study (12 semesters) and finals get a new structure, that include the Final Exam (or State Exam) and the Diploma project – the latter being developed during the whole last year of study. Every detailed aspect, of economic and social context, is directly applied into any diploma project, thus having a strong effect on the students’ mindset as well as the profession’s, in general, while the ideological restraints place them in a convergent perspective. The general compulsory rule of the Socialist Realist, official architecture is adopted, yet absurd and all the more so imperative in deployment. The individuality, original ity or innovation – as essential qualities as they are in the evolution of this artistic field are strictly cancelled and any means of their further occurrence will be taken as a straight injury towards the system. The experiment, the idealistic-utopia or innovation within the projects is progressively diluted into the “realism” of the socialism building. Until 1947, the Romanian architect could still enjoy a liberal practice, either as a freelancer or as a principal of an architectural bureau. In the post-Stalinist era (1953) though, his professional private practice is forbidden. In the meanwhile, the building regulations become strict and compulsory applied into the architectural design and urban planning, while indirectly they also infuse the architectural education system. Consequently, the study of the 50’s tries to discover the various aspects of both the Romanian architectural practice and the School of that time – by analysing its Diploma Project, as well as its Final Exam, developed as significant and meaningful pieces of this very process.