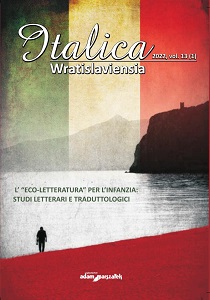 Summary/Abstract: Among the forms of children’s literature that deal with the complex relationship between humanity and nature, comics can offer various insights on the topic for boys and girls. In particular, children’s stories have recently revitalized the scout movement, interpreting it through new values related to identity, gender and ecology. This paper will consider two comic book series on scouting, Hilda (Luke Pearson, 2011–2019) and Lumberjanes (Noelle Stevenson, 2014–2020). Both works tell the story of a diverse group of characters involved in scouting activities: the stories, developed in natural settings, portray the growth of young and peculiar characters who, through constant contact with the environment, show a strong respect for both nature and the peer group, in a peaceful and adventurous coexistence with the environment and the different forms of life that inhabit it. The essay aims to develop a first state of the art that highlights new interpretative strands in this literary genre through an ecocritical and ecofeminist lens. The study explores the two works in a comparative perspective, so as to show how comic book narratives can present interesting ecological and egalitarian dynamics, in this case through the experience of scouting.