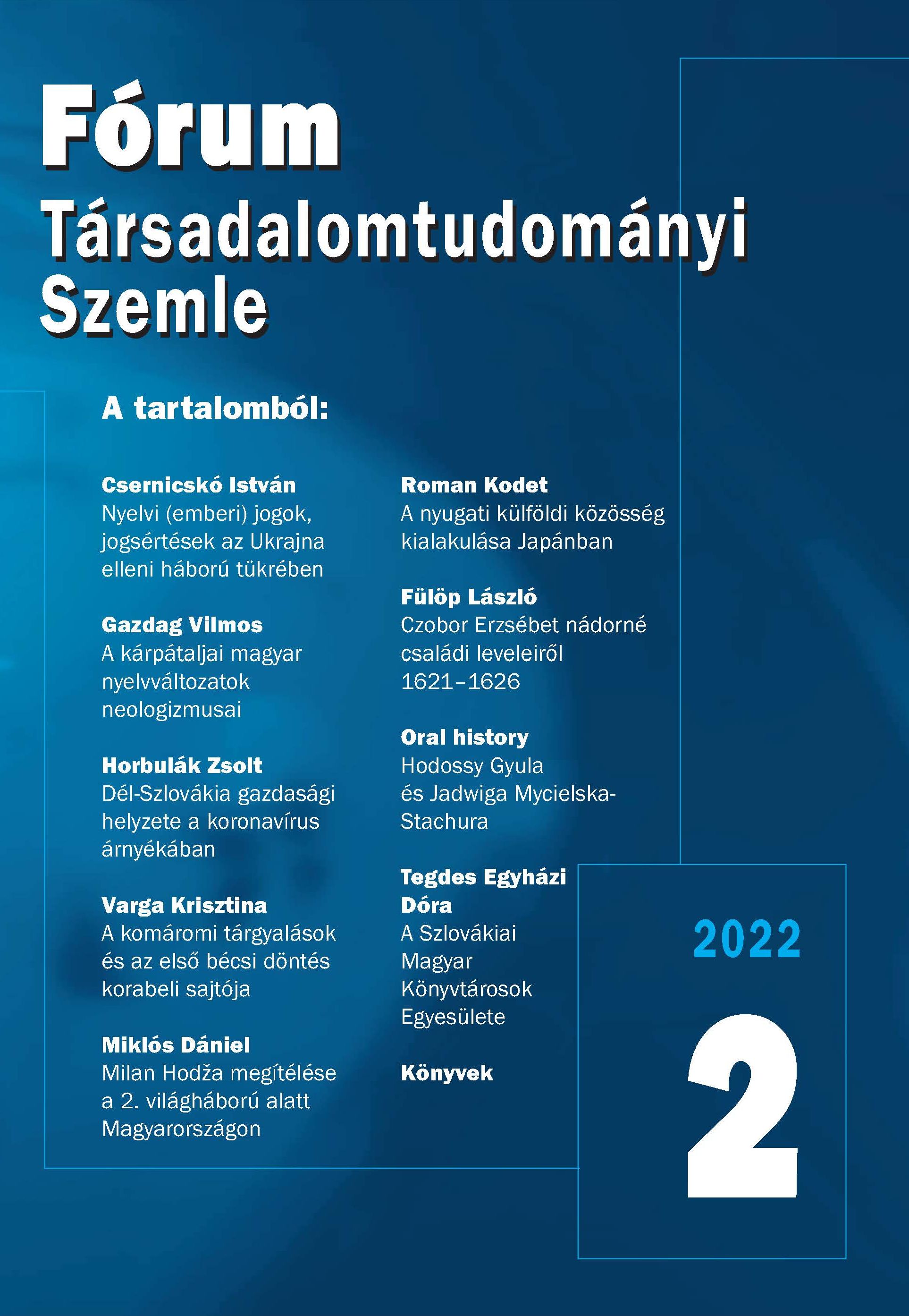 Summary/Abstract: The aim of our study is to briefly summarise the course of the negotiations in Komárno and the First Vienna Award, and to give an insight into how the Hungarian and Slovak press of the time commented on the events. The Hungarian press blamed the Slovak party for the breakdown of the negotiations, saying that the Czechoslovak party was trying to stall for time and that it had not offered Hungary a number of territories with a predominantly Hungarian-speaking population. The Slovak papers, on the contrary, blamed the Hungarian party for the breakdown of the negotiations because of its excessive territorial claims. The Hungarian newspapers reported the outcome of the First Vienna Award with great joy and enthusiasm, while the Slovak press, of course, was negative. Although the First Vienna Award resulted in an ethnically much more equitable borderline between Hungary and Slovakia than it was before, the “Hungarian times” did not last long in the life of the Hungarian minority in southern Slovakia. After the Second World War, the First Vienna Award was annulled, as was the Munich Agreement. The Paris Peace Treaty, signed by Hungary on 10 February 1947, reaffirmed Hungary's Trianon borders, which once again put the Hungarians in Slovakia in a disadvantaged and minority position.In the 1900s, the communist ideals of the Soviet Union had a profound impact on all aspects of life. The party leadership, in its efforts to create the 'Soviet man', sought to control everything, whether it was public life or the recreational opportunities of its citizens. The same applied, of course, to agricultural and industrial activities. Here the party leadership, in a spirit of constant competition, sought to achieve the best possible results, to prove to everyone that there was always room for improvement. The ideological and economic impact was, of course, not only felt in people's daily lives, but also in the language they used. Many new concepts, objects, work processes and occupations were born, which had to be given a new name and became established in the language of minorities, including the Hungarian minority in Transcarpathia, as words without equivalents, in the form of direct borrowing. A significant number of these words are acronyms typical for the period in question and in historical and ethnographic research are nowadays mainly referred to as Sovietisms or historicisms. Of course, as stated in the title, this work is primarily concerned with those Russian and Ukrainian loanwords (or more precisely, some of them) that are also rooted in the Transcarpathian Hungarian language varieties, which were strongly connected to the political and economic institutions of the Soviet era, and as such, are gradually archaizing since the fall of the regime, as the generation of active workers grow older and die off.