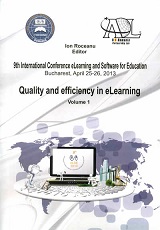 Summary/Abstract: Any type of education, including mathematical education has a double effect. On a side, the person who learns obtains knowledge, and on another side he forms those abilities that are used trough practicing, he develops the necessary strength to perform this kind of education. Cognition is formed through mathematical education. Certainly it brings its part to the formation of cognition in other actions, but primordially in the role of mathematical education. This article presents an observational research on the main mental operations: analysis, synthesis, abstraction, generalization, concretization, comparison and analogy of what leads to the formation of notions, theorems proving, problem solving etc., and developing pupil’s cognition during secondary school. This research has taken into account :- the manner of approaching and consideration of formation mental operations through mathematical education in secondary school and the additional impact on the behavior of pupils; -the creation of a systematic observation regarding the manner haw mental operations were formed during lectures assisted in pedagogical practice in the AEL laboratories:-recommendation of some methods that form mental operations for the creation of a mathematical thinking and to develop approaching abilities in finding the key answers of some problems.