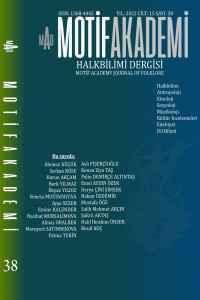 Summary/Abstract: The aim of this study is to determine and interpret the knowledge of the nature of the word, its semantic features and how it should be used, that is, how it should be spoken in the traditional worldview of Turks, with the help of sample texts, based on the samples of proverbs. The material of this study consists of 200 proverbs obtained from the transferring and examining studies about the proverbs of Turkish communities. In the examinations carried out, it has been observed that the "word" in proverbs involves philosophical, rhetorical and social dimensions. In this respect, on the basis of two sources, which are heart (emotion) and mind (knowledge), and according to its meaning, content and effect on the addressee, words are divided into six as precious words, true/right words, nice/sweet words, bad/vulgar words, lies and empty/meaningless words. The effect of the word on the life of the individual and society is quite high, positive or negative. Suggestion of proverbs to the individual and society about how the sayings should be expressed is that they should be worded concisely, on the spot and on time. As it can be understood from the determinations and comments made in the study, proverbs are important language assets that form the essence of the traditional world view and folk philosophy of the Turks. It reflects the socio-cultural values and the system of norms in relation to the word in folk thought. Proverbs have an instructive and guiding function in terms of explaining the nature of the word and teaching the individual and society how to speak. The prominent place of the word in proverbs shows the importance given to human relations and communication in the view of individual-individual, individual-society in the thought systems of Turks since the ancient times.