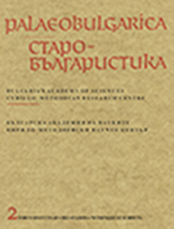 Summary/Abstract: The article presents the Greek text of sermon 20 from Constantine of Preslav’s Učitel’noe Evangelie (UE) based on Cramer’s standard edition of the Greek Catenae, yet, extended by the text of ten other manuscripts. The Greek text is juxtaposed to the Old Bulgarian one and the text of the relevant Homily of John Chrysostom. A detailed analysis is provided for all passages where the newly adduced variant readings correspond better to the UE text. Often, the compiler of the UE seems to have used the text of the Homily. In other instances, however, it appears that the Catena and the Homily texts were used simultaneously by him. Cramer’s text is further verified against the primary source of the edition (Cod. Coisl. 23) together with the witness used by Cramer for the Supplementum to its edition – Bodl. Auct. T. I. 4. Thus, the Greek text corrects some misprints in Cramer’s edition while at the same time providing new readings that stay closer to UE text. In conclusion, some observations are drawn regarding the relations between the witnesses of the Greek tradition that might be useful in a future critical edition of UE’s Greek Vorlage.