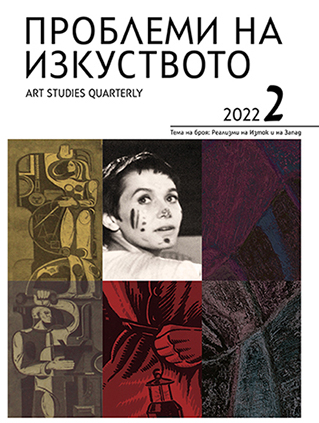 Summary/Abstract: The cinema language has adopted a few simple practices from the aesthetics of the Italian Neo realism, namely, the use of real events, without them being significant; going into the street with a camera against the artificially beautiful; shooting in a natural environment without the use of decors; casting both professional and amateur actors, so that to break the stereotype – they had ‘to live’, not to act; invisible directing, without bright metaphorical means of expressions, i.e. to resemble voyeurism; and an active protagonist, a member of the lower classes. One of the finest artworks of the movement is Vittorio de Sica’s film Ladri di biciclette. Comparing it to the Bulgarian film Това се случи на улицата by Yanko Yankov, in terms of the above mentioned practices, one can claim that all they have been adequately applied in the Bulgarian production too regardless of the different levels of development of the cinema industry and, moreover, despite of the ideological differences in the dominant then socialist realism in Bulgaria. What we see on the screen in both cases is an authentic copy of reality.