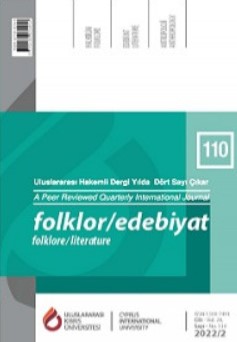 Summary/Abstract: Epics, in which various events such as war, famine, internal political conflicts, and natural disasters, have deep traces in the minds of nations and are conveyed through generations with mythological elements that are not too far from the Dede Korkut Stories. Mythic period traces found in the stories have formed a layered structure equipped with concentrated information. Although chronologically, the first layer is actually the last layer added, it is the most understandable and appealing layer to the general reader. The latter layers are much deeper because its context diverges a little further from the reader. In order to reach the deep structure, as aimed in this study, the method of discourse analysis, which focuses on the archeology of the text, is based on the dominance of the ideology on the text, and the perspectives of linguistic anthropology has been used; since the words and structures they form in the texts come into existence not by chance but by “selection”, These two fields of study are always in an interaction and exchange with each other. According to research, climate plays a very important role in the formation of civilization and interacts with their social, economic, and political elements. Thus, climate changes and their consequences (famine, migration, etc.), wars, important warriors, opinion leaders, and victories throughouth the world can be conveyed through literary texts. When the layered structure in the Tepegoz story is examined, the connection between climate-human interaction is clearly seen. In this context, the story where Basat killed Tepegöz, has been analyzed with the support of data from various disciplines such as environmental history, medicine, climatology, zoology, geology, geography, and toponym, in accordance with the interdisciplinary dimension of discourse analysis; as a result, the Tepegoz-harsh winter link was revealed.