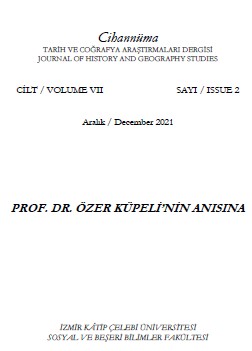 Summary/Abstract: Tekirdağ is a province that attracts attention with its port that transported the grains of the Thrace region to Istanbul. Most of the time, bostani hasekis were used as state agents in the business of shipping the grain to Istanbul. Although bostani hasekis were also used in the 18th century, the most important difference in this period was that they mostly came from wealthy families. One of them, Sirozi Mustafa Agha, was a dignitary who performed important jobs in the 18th century meeting the food needs of Istanbul. With his businesses, farms and foundations, Sirozi Mustafa Agha was well-known by the State and the people. He was renowned not only in Tekirdağ but also in Istanbul because he was married to Mustafa Pasha’s granddaughter. This kinship and wealth enabled him to be appointed as a state agent for grain supply and as the Bostanji-Bashi of Edirne. However, since he did not have a son to entrust his wealth and status, his sons-in-law took over his responsibilities. He married one of his daughters to the only son of another dignitary from Tekirdağ, another to a haseki, who is also mentioned as a dignitary, and the other daughter Hatice to Veli, son of Habib Agha. Among the grooms, for Veli, in particular, Sirozi was the best example in terms of prestige, career and wealth. In fact, as a result of his marriage with Hatice, Veli was able to turn to one of the rich people of Tekirdağ and was appointed to continue his father-in-law's responsibilities over time. The present study focuses on Mustafa Agha's son-in-law Veli, who controlled some of his wealth, and his daughter Hatice, describing the spouses' inherited wealth and living standards, and the network of relationships forming around that wealth. The article aims to contribute to the understanding about the role of families in the status-wealth relationship of the 18th century on a micro scale and will contribute to the family history of Tekirdağ and set an example regarding the network of relations in the Ottoman society.