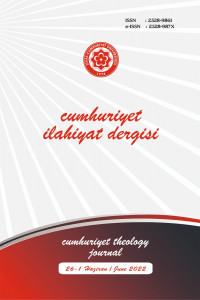 Summary/Abstract: he tradition of presenting eulogy to the sultan, which was common in Turkic-Islamic societies, is not only related to poets' desire to gain rank and gifts but also has strong religious foundations. Firstly because the Prophet Muhammad liked Qaṣīda al-Burda, he gifted his mantle to the poet Ka‘b b. Zuhayr (d. 24/645). Hereafter the sultans, regarded as the khalīfa of Islam, always supported the poets to comply with the prophetic traditions (sunna). Thus the tradition of presenting eulogy to the sultan as showing devotion became widespread among poets. There are verses in the Qurʾān that point to the political relations between the governor and the governed in the world order. Accordingly, the governors are responsible for ensuring justice and serving their people. Also, the obedience of the governed people to the governors is a religious obligation for peace and stability. The reign (salṭanat) is of divine origin and obedience to the sultan is obedience to God and his Messenger. According to the widespread religious-sufistic view, the salṭanat is divided into two parts: a. Salṭanat-ı ẓāhir (the real reign) is that the lawful sultan reigned. b. Salṭanat-ı bāṭin (spiritual reign) is that bestowed on the patron saint (quṭb). The lawful sultan and the quṭb are religious heirs of the Prophet Muhammad (s.a.s), the most perfect human. So, there is a spiritual connection between the quṭb and the lawful sultan of each era and the quṭb helps the sultan with the support of God. It should be noted that such statements are a reference to the politicalspiritual union in the structure of the state. Ottoman sultans represented the caliphate model fermented with sufistic thought. In the Ottoman state tradition depending on the religious-sufistic sources quṭb-sultan relationship was considered important. The desire of every sultan to establish an affiliation with the most famous Sufis is a result of this relationship. The Ottoman people also respected the sultans, whom they saw as the last guardians of the world order (niẓām al-ʿālam). This is not the imposition of the sultan on the public but is a natural formation reflecting the agreement between the sultan and his people. Thus the legitimacy of the Ottoman sultanate had been supported by Walâyah and menākıbnames since the establishment of the state. For example, Sulṭān Bāyezīd II was known as a saint (walī) in public with his legends. But the sultans were aware that exaggerated expressions such as quṭb, mahdi in the odes were used to refer to the political-spiritual unity. With this awareness the Ottoman sultans always made an effort to protect the scholars and artists to show the power of their reign, to make their effects permanent and to gain the support of their people. Therefore, the entertainment assemblies of the sultans, most of whom were good poets, calligraphers and musicians since their princedom, had always been the most important art gatherings where especially poets and musicians exhibited their skills. Being an artist and an art-loving leader Bāyezīd II generously patronized scholars, artists, and especially poets from all over the world during his princedom in Amasya and his reign (r. 886-918/1481-1512). While he was in Amasya, he was with poets Zeynep, Mihrī, Necātī Beg, Müeyyedzāde, Hātemī, Tācizāde Cafer etc. He was a professional calligrapher, poet and composer. His nickname ʿAdlī (lawful) was appropriate to his activities: During his reign, with the spread of justice and prosperity, the peace and stability of the society increased; there had been a great development in arts, especially literature and music. The official notebook includes registers of the gifts given to the poets during the reign of Sulṭān Bāyezīd II. There are not only famous poets such as Necātī, Ḥamdī, Revānī, Firdevsī-i Rūmī, Mihrī, Ẕātī, İdris-i Bitlisī, Şerīfī, Mesīḥī but also many unknown poets in the notebook such as Nūḥī, Keşfī, Ṣafāyī, ʿAzīzī, Ṣabāyī, Mā’ilī, Sā’ilī, Rūḥī, Şehdī, Kātibī, Saʿyī, Refīḳī, Lālī, Naṣībī, ʿİyānī, Yarḥiṣārī, Vaṣfī, Müşterī, Viṣālī, Sinānī, Nişānī, Şefīʿī, Żamīrī, Nāṭıḳī, Edībī, Ḥadīdī, Baṣīrī. One of the poets mentioned in the book is poet Jawharī. In this article, the religious-sufistic background of poets’ tradition of presenting odes is explained and the determinations are made about unknown poet Jawharī’s life and his new poems’ literary value, linguistic and stylistic features of the poems translated.