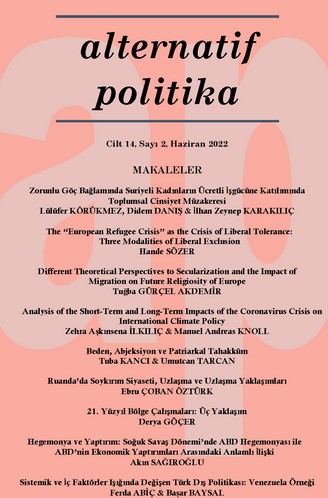 Summary/Abstract: In Julia Kristeva’s psychoanalytic theory, abjection does not only reveal the interactions of the body with the conscious and unconscious; but also reveals the patriarchal domination of body imagery. Kristeva uses abjection as a phenomenological subject and examines its effects on experiences from a postfeminist perspective. According to them, the experiences that emerge under patriarchal domination are vulgar and marginalized movements that fade in material existence, just like the “wastes” of the body. This study aims to criticize the subordinate position of the body in the history of pre-modern and modern thought and deconstruct the patriarchal domination on the imagery of body by using Julia Kristeva's theory of abjection. Thus, in the first part, the journey of body from Antiquity to modern social theory is evaluated from a chronological perspective and discussed by focusing on thinkers such as Immanuel Kant and Emile Durkheim. In the second part, the relationship between body and psychosis in the doctrines of psychoanalysts Sigmund Freud, Alfred Adler and Jacques Lacan is explained. In the third part, Kristeva’s abjection theory and the patriarchal construction of abjection are analyzed. The study concludes that rescuing the body from patriarchal abjection is a requirement that maintains its validity in terms of feminist literature.