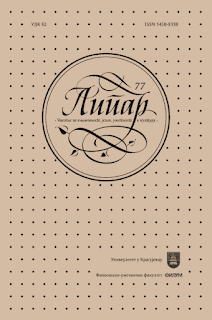 Summary/Abstract: In this paper, the presence of the motif of rebellion is analyzed on the basis of two prose works: Davoka’s story of Jahijel’s rebellion (1953) and The story of the farmer Siman (1969). We establish a connection between the two main charac- ters, Samokovlija’s Jahijel and Andrić’s Siman, to distinguish between two forms of resistance. Jahijel’s rebellion is an ordinary, human revolt, whereas Siman’s is a revolutionary one; Jahijel opposes Jewish customs and tradition, while Siman opposes authority and government. Although the reasons and results of their op- position are different, both are fighting against ingrained social principles that don’t allow a marginalized individual to progress and free himself