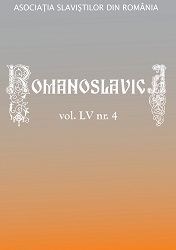 Summary/Abstract: In this paper we set out to discuss the phenomenon of exile, which is still current and extremely varied from the perspective of identifying one’s belonging to one of the national literatures deriving from Yugoslavia after the nineties. During the history, wars were one of the major causes of exile, encompassing the entire range of typologies: economic, political, cultural, ethnic exile. During the war in the former Yugoslavia of the nineties of the last century, a number of writers decided to leave their country. Among them there were: Alexandar Hemon, Dubravka Ugrešić and David Albahari, all of them being currently recognized and famous authors. However, the paper focuses on the literary profile of the writer Vesna Goldsworthy, who, by marriage, decided to settle in the UK. Being "stuck" between two cultures, she cannot give up either of them as they both are part of her being both in literary and in personal terms.