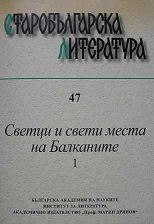 Summary/Abstract: The story about the repentant prostitute Thais (Taisia), absolved of her sins and glorified as a saint after years of a voluntary banishment in a monastic cell, has enjoyed noteworthy popularity in West European art and society – since the end of 19th c. it has been remade in novels, films and even in an opera. If we turn farther back to the Middle Ages, we would find out that this story rouse interest too as it has Greek, Latin, Syriac and Slavic versions. In the Byzantine manuscript tradition (from which all the rest derive) it circulates in several variants and genres – oral narrations became apophtegmata, one apophtegma became sermo, then finally sermo became vita. The article examines the Slavic medieval translation of one of these Greek texts, namely Conversio Taisiae. The stress is laid on its dissemination in manuscripts that are successors of the initial Chrysorrhoas (Zlatostruy) corpus. An attempt has been made to reconstruct the stages in the transmission of the Slavic version by joining data of both text critical comparison of the witnesses and the history of the collections that incorporate these witnesses.