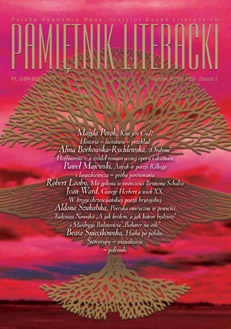 Summary/Abstract: The theme of the paper is the presence of the motives of antiquity in R. M. Rilke’s and J. Iwaszkiewicz’s poetry. A discussion on Rilke’s competence in classical languages is followed by an analysis of his “poetics of things”, as this method played the most important role in the creating of the poems devoted to motives of antiquity. Most of the poems in question come from the volume "New Poems", and their interpretation takes the most space in the body of the paper. The author concentrates also on the connections with antiquity as seen in "Sonnets to Orpheus". The final part of the article refers to the traces of antiquity in Iwaszkiewicz’s "Sicilian Sonnets". The main aim of the paper is to indicate that Rilke’s “antiquity” and Iwaszkiewicz’s “antiquity” should not be regarded as a set of simple and direct reference to a reservoir of ancient culture, but are an effect of a complicated hermeneutic process, in which the respective authors reveal antiquity as necessary for their own creative reasons, and in doing so they follow numbers of intermediary levels of cultural memory.