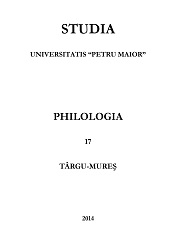 „Autenticitatea”, de la literar la etic şi înapoi
”Authenticity”, From the Literary to the Ethical and Back

Summary/Abstract: The debates around “authenticity”, in the Romanian literary criticism, have generally laid stress on such aspects as the narratological, the biographical, the mimetic, or the “poietic” (depending on the contrasting pairs taken into account: narrator vs. character, author vs. character, text vs. reality, author vs. text etc.). Some researchers based their commentaries on an etymological perspective, resulting in the broadening of the concept used and abused of in the interwar Romanian journalism. However, the nuances added by the late 20th c. local literary criticism cannot supply for the centuries of construction / deconstruction / reconstruction of the concept in the history of the European culture. This paper aims to point at a possible bridge between the ethical / philosophical developments of the concept and its use in the current literary discourse. Starting from some theories put forward by Charles Taylor or Alessandro Ferrara, an updated version of “authenticity” could be launched on today’s (literary) market.