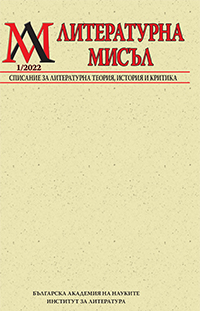 Summary/Abstract: The article analyzes one of the key ideas of Prof. Atanas Natev in his attempt to create a systematic theory of drama, namely his theory of "intermission" as a basic constructive principle for building dramatic action and the specific way in which drama affects the perceiver. The theory of "intermission" is compared with the ideas of the emerging at the same time literary discipline "narratology", the work of the structuralist trend in literary studies. This is necessary because narratology has given other explanations to some of the key ideas in the theory of "intermission". The main question that is asked in the article is whether in the seemingly devoid of the figure of the mediator dramatic composition, such does not exist, albeit only implicitly. Because drama, as well as the other two genres - lyric and epic -, need the fictional figure of the subject, which turns the amorphous structure of the "flow of life" into "history", and then into a carefully composed plot for the viewer to recreate in his mind during the performance, as the theory of the "intermission" states.