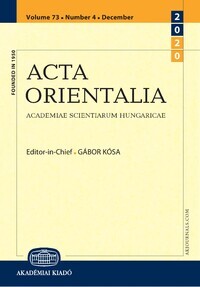 Summary/Abstract: In Turkic, hendiadys has an important place as a method that is used for the emphasis of an expression. In addition to Old Turkic inscriptions, hendiadyses, which are often used in Old Uyghur texts, still survive in contemporary Turkic languages. In this article, the hendiadys of yogun yolpa i.e. ‘unmannerly, cumbersome, rude, ugly’ which appears only once (hapax legomenon) in Old Uyghur texts, and never in works from other periods, will be studied in comparison to examples from contemporary Turkic languages. The etymology of the two words yogun and yolpa which form the hendiadys will be investigated. The first element of the hendiadys, yogun, ‘intense, rude, rough, ugly’ has already been the subject of various studies. The other element of the hendiadys, the word yolpa, which does not appear in any other text, is analysed in this article.