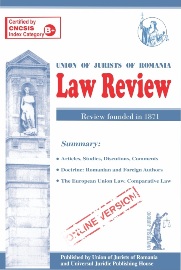 Summary/Abstract: The historic evolution or Roman law was in a determination relation with the factors which configure law, especially the social-political ones or the economical ones, but also those which pertain to the natural background in which Roman society evolved, thus passing from the citadel-state to the “polis” type of state and then to the universal state - the Roman empire - which would later become a model of political, military and legal organization for the entire antic world. Roman law was created in the history of the eleven centuries of existence or the Roman state which passed several stages of development, excelling in the classical age when, given the great reforms which are performed under the direct influence of the praetorian, the main legal magister, certain principles and legal institutions are created which proved to be viable across the centuries to follow, thus directly influencing the subsequent legislative activity in the modern and contemporary age in the European space.