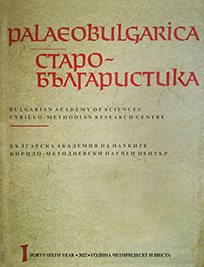 По следите на боландистите, или за първите приноси в научното изследване на изворите за живота и делото на св. Кирил и св. Методий
In the Footsteps of the Bollandists or on the First Contributions to the Academic Study of the Sources for the Life and Activity of Sts Cyril and Methodius

Summary/Abstract: This publication traces the shaping of the Latin hagiographic dossier on St Cyril and St Methodius under the impact of the trends of the Counter-Reformation. At the time, under the influence of political and ecclesiastical events, a significant change occurred in attitudes towards the writing of history and the use of sources. The first Baroque hagiographical series appeared as a result of the rivalry between Protestantism and the Catholic Church. Scholars of hagiographies developed a methodology for studying, commenting on, and publishing hagiographical texts. Based on some ideas inspired by the Commentaries on the Roman Martyrology and the Ecclesiastical Annals by Caesar Baronius, the most celebrated hagiographical series, the Acta Sanctorum, arose in Jesuit circles. In keeping with the paradigm set by Pope Gregory XIII’s Roman Martyrology, in its March volume, the Bollandists included St Cyril and St Methodius as bishops of Moravia with the See of Olomouc among the memorials for 9 March. Led by the general conception of the series announced in the treatise-praise of the Founder of the Society, Jean Bolland, Henschen and Papebroch subjected all the testimonies about the holy brothers written in Latin and accessible to the first researchers to as complete an analysis and historical, liturgical, and textual commentary as possible. To achieve this they used, on the one hand, the richest collection of manuscripts and transcripts of hagiographies at the time, begun by Rosweide, and, on the other, a network of correspondent scholars. The names of eminent ecclesiastical writers and scholars of the era: Abbot Ughelli, as well as Jesuits – Jean Gamans, Ludovicus Crasius, Theodorus Moretus – stand out among the collaborators on the hagiographic dossier of Sts Cyril and Methodius. Some of the Bollandists’ correspondents were also distinguished professors at Jesuit colleges in Bohemia and Poland. Thus, they greatly facilitated the Bollandists’ access to primary text sources and sent some autopsy reports. As a result, Henschen and Papebroch presented St Cyril and St Methodius in the Acta Sanctorum as the Apostles of the Slavic peoples. Relying on the analysis of historical evidence in papal letters, the letters of Anastasius the Librarian, Anastasius’ preface to the Protocols of the Eighth Ecumenical Council, and hagiographical texts, they offer the first-ever chronology of the apostolic activity of Sts Cyril and Methodius. They publish and comment on four texts – the so-called Italian Legend (BHL 2073), the Moravian Legend (BHL 2073z, BHL 2074), the Breviary readings Blessed Cyril (BHL 2075= excerpts ex BHL 8825) and a fragment of the Life of St Ludmila, recounting their work in Moravia (BHL 5031). They accepted that the Italian legend is the oldest text and attributed its authorship to Gauderich of Velletri. Until the discovery of the Slavonic lives of the Saints, the Italian legend was considered the most important testimony to the life and work of the Holy brothers. Declaring it foundational and generative of some later texts, the Bollandists created the core, to which later scholars added Cyrillo-Methodian Latin sources up to the twentieth century. This review and commentary paper highlights the conclusions of the early researchers that have remained a constant in scholarship. The paper also offers answers to some of the Bollandists’ questions and revisions made by subsequent scholars. We stressed the fact that to appreciate the magnitude of the work of the pioneers in Cyrillo-Methodian studies it is necessary to go beyond the narrow confines of the text of the first commentary. That is why we give supplementary accounts from other volumes in the series. The Bollandists themselves made some of the references to readings in Acta Sanctorum. A review of the supporting literature they used to produce the scholarly study is also relevant in assessing the academic method of work. We make new clarifications concerning the deformation of some evidence from liturgical readings about the saints in Polish and Czech Office books from the 15th and 16th centuries.