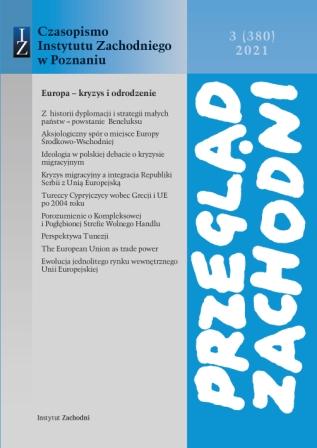 Z historii dyplomacji i strategii małych państw. Geneza, kulisy i doniosłość belgijskiego sukcesu w powołaniu do życia Beneluksu
From the history of diplomacy and strategy of small states. The genesis, backstage and significance of the Belgian success in launching Benelux

Summary/Abstract: The success of Benelux is measured by its history and achievements after World War II. However, the genesis of this project goes even deeper as it arose in correlation and symbiosis with others attempts by the governments of small states in exile. The need for cooperation after the war to oppose the domination of great powers was an important impetus for these integration efforts. The network of personal connections and discreet démarches played an important role in this process, as did the public debates. From among many various projects, it was the Central European federation that gained the greatest publicity. In the atmosphere of heated debates, the more discreetly guided Benelux project emerged, which the great powers had managed to resist. This background is revealed in the article.