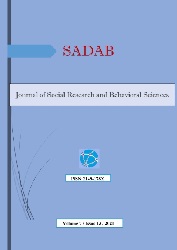 Summary/Abstract: It has been tried to do document analysis together with content analysis about some terms in the works written between 1949 and 1982, which is assumed to be the first period of the psychology of religion. The terms researched are “şuur (consciousness)” and its derivatives in Ottoman, and “consciousness”, “subconscious”, “unconscious” terms which is the modern usage of the term “şuur” and “adolescent, puberty” terms of Western origin which correspond to the meanings of “ergen ve argenlik”. The frequency of the use of these terms in the books was determined and it was examined whether there was a change in time, and the scientific language in using the terms of the psychology of religion was tried to be understood in line with the qualitative method. As a result, the psychology of religion changes some of these terms over time, while others still use them. By examining whether the purposes and bibliographies of the early psychology books were similar or different, it was understood that these terms used in the books of the early psychology of religion kept pace with the language and psychology science language of that period and their changes over time. In addition, it is understood that the works written by theology-based religious psychologists do not only serve the science of psychology of religion, but also they have an individual, educational, political and social goals.