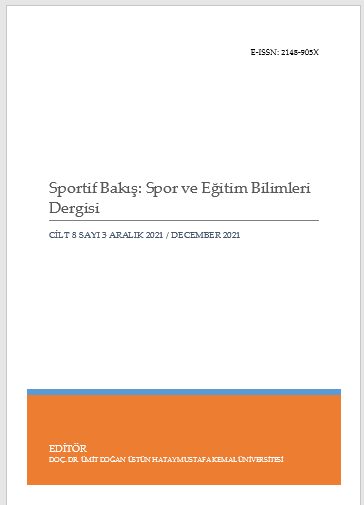 Summary/Abstract: Athletes have to cope not only with their opponents but also with many psychological factors for success. The aim of this study is to test the validity and reliability of the "Challenge And Threat In Sport Scale” developed by Rossato, Uphill, Swain and Coleman (2018) for Turkish culture. The psychometric properties of the scale were tested on 75 female (27.3%) and 200 male (72.7%), total 275 (average age= 17.91±2.82) athletes. There are a total of 12 items and 2 subscales in the original of the Challenge And Threat In Sport Scale. To test the construct validity of the scale in Turkish culture, explatory factor analysis and confirmatory factor analysis was applied. Internal consistency co-efficients were calculated for each subscale of the measurement tool. As a result of the confirmatory factor analysis, it was seen that the Turkish version of the scale, as in the original scale, consisted of 11 items and 2 subscales: "challenge" and "threat". It was fastened down that the factor loads of the items that make up the scale varied between .40 and .81. According to the confirmatory factor analysis results, it was calculated as χ2 / df = 2.64, GFI = .94, AGFI = .90, CFI = .94, IFI = .94, SRMR = .07 and RMSEA = .07. Cronbach Alpha internal consistency coefficients of the scale were calculated as .84 for the "threat" subscale and .80 for the "challenge" subscale. As a result, it can be said that the psychometric properties of "Turkish Challenge And Threat In Sport Scale" is an adequate measurement tool to evaluate the challenge and threat levels of competing athletes in various branches.