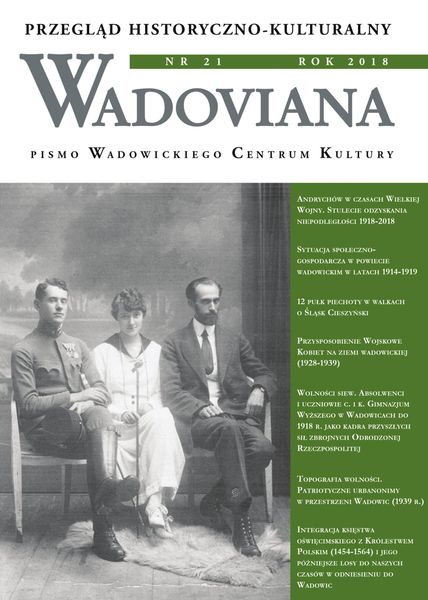 Summary/Abstract: The article remains participation of the 12th Infantry Regiment in the defense of Cieszyn Silesia during the Czech invasion of Poland from 23rd to 30th January 1919 r. This conflict was a part of the regaining independence process by Poland and the struggle of the shape of Polish borders. The introduction includes the subject of the dispute, its history and antagonists’ arguments . There are also some political and economic reasons of the outbreak of Czech-Polish war. The author underlines insidious and disinformation actions by Czech. Their army pretends to be Ententa army and tries to use the international mandate for their aggression. The next part shows the military aspect of the conflict and the Polish and Czech strength. The presentation of war events connected to the 12th Infantry Regiment participation in the war is also presented and the diplomatic circumstances of the end of the conflict between both countries are wildly described. The gory battle near Stonawa, Kończyce Małe and Zebrzydowice on 26th January is emphasized because of the participation of soldiers from 12th Infantry Regiment. One of the soldiers, who died on 26th January near Stonawa, was Henryk Karol Taub. He was given the Knight's Cross of the Order of Polonia Restituta by the president of Poland on 22nd October 2018.