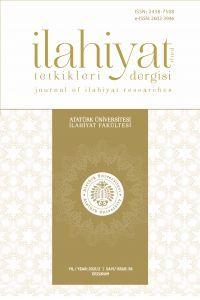 Summary/Abstract: Al-Ḥurūf al-Muqaṭṭaʿa, which are at the beginnings of the 29 sūrahs of the Qurʾān and consist of 14 letters, have been a subject of curiosity since the time of the Successors. About al-Ḥurūf al-Muqaṭṭaʿa, as they appear with a non-existent usage in Arabic language - at least within our knowledge of the language so far - more than twenty interpretations have been made. Islamic scholars who thought that they could not understand these letters, have included them in the category of Mutashābihāt, which has been beyond our limit of comprehension and have treated these letters as they were, without interpretation. These letters, which are included in the research field of linguistics, indeed have caused a problem of coherence since they have been under the same heading with the transcendental subjects of Mutashābihāt such as the attributes of God, knowledge of the future, Heaven, Hell, Angels. On the one hand, this problem has forced the commentators to interpret al-Ḥurūf al-Muqaṭṭaʿa out of their usual way which cannot be explained comparing their general interpretation styles. On the other hand, these letters have taken their place among the indispensable subjects of Orientalist Qur'anic studies.