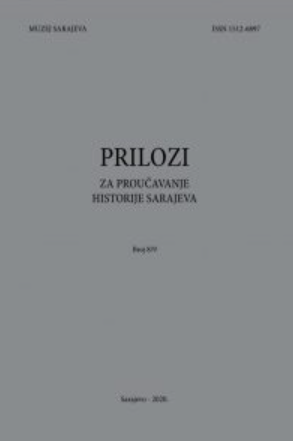 Summary/Abstract: Some further research can give an answer as to which of the two mentioned graves is the one of Tevekkuli-dede, and whether those with indentations on the Muslim tombstones are alms pillars. One idea can be that grave tombstones were used also for this purpose, i.e. that they were used as alms pillars at the same time and that they also marked the place of burial. It is a well-known fact that the nuances in the making of tombstones are most noticeable in Sarajevo. The data left by the chronicler Bašeskija show that in his time great attention was paid to memorials in Sarajevo, so, when writing about the death of several Sarajevo stonemasons, he says that some of them were “excellent masters in carving Muslim tombstones”. That is why it is no coincidence that the Sarajevo Muslim tombstones were also known outside Sarajevo, so we can come across them in other parts of Bosnia as well. Over 400 years of the Ottoman Empire, i.e., its rule in this region, had to leave and left deep traces and an indelible mark on people, culture, customs, on all spheres of life and living, and, thus, on the giving of alms and customs related to it. Thus, we can assume that the custom of giving alms through alms stone pillars probably existed in the region of today’s Bosnia and Herzegovina, although there is none, except the one we mentioned above, that could point to this fact. This could be proved by further scientific research of our region.