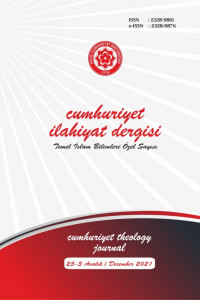 Summary/Abstract: Mushkil al-Qur’ān is a science of the Qur’ān in which the verses that are considered contradictory at first glance and what ways/methods are used in reconciling them. From the point of view of a commentator or even a believer, the ishkal (contradiction) cannot be attributed to the Qur’ān proper, and the supposed contradictions between verses do not appear in the Qur’ān but the mind of the subject. Therefore, in this science, it can be seen that both the recognition of contradictions and the elimination of contradictions are related to the interpretive context of the tafsīr methodology. This science has emerged on a dynamic ground and has a characteristic feature that determines the interpreter’s ability to interpret. The aspect of the Mushkil al-Qur’ān that distinguishes it from other Qurʾānic Sciences relates to the practical dimension of the tafsīr rather than general determinations and statistical information about the Qur’ān. For this reason, the scope of the Mushkil al-Qur’ān may change depending on the time, culture, perspective of the commentator, knowledge, and school preferences. The fact that disciplines define the concept of mushkil in different ways, and the change in the scope of the subject in the independent works written in the early period and the Qurʾānic Sciences literature written after al-Zarkashī requires a terminological-chronological-methodological analysis of the nature and content of the Mushkil al-Qur’ān scholarship. With its pre-Zarkashī structure, Mushkil al-Qur’ān science differs from its structure that emerged in the later period, both in terms of its target audience and its content. If we look at the works of names such as Ibn Qutaybah, it becomes clear that this science is mandated to cater to the religionless. However, especially with the scope and methods in which it has been dealt with in the recent period, the Mushkil al-Qur’ān is based on the internal dynamics of the shari'a sciences. Therefore, it can be said that al-Zarkashī defined the science of Mushkil alQur’ān, which had a comprehensive content in the early period, with a different name and a narrowing of its content as a field fed by the internal dynamics of the tafsīr, and that this science acquired a unified form after al-Suyūṭī. This process brought about some changes in the subject matter and content of the science of the Mushkil al-Qur'ān. For the Mushkil al-Qur’ān, which in the early days had the purpose of answering the doubts and objections of the deniers of the Qur’ān, developed after al-Zarkashī into a field mainly concerned with removing the difficulties of understanding. Within this framework, the methods and classifications presented in this science with the structure defined by al-Zarkashī are the products of the effort to make sense of the Word of God. The systematization of this effort to make sense under the umbrella of shāri‘ sciences in a terminological and theoretical framework opens the science of Mushkil al-Qur'ān to the fields of kalam and fiqh/method. In the works written on Mushkil al-Qur’ān and in the literature on fiqh, the reasons for the contradictions between the verses and the ways to eliminate them are given. What these ways depend on the context in which the contradiction is dealt with. Those who treat the contradiction in a way that includes the ambiguities in the words while eliminating these ambiguities resort to other pieces of evidence such as narratives, style of expression/context, truth metaphor, reason, analogy, and custom. In case of an apparent contradiction, methods like cem‘ (gathering), preference, naskh, renunciation are used. Despite the differences in the school’s preferences as to which of these methods was used first in the classical period, there is almost a consensus as to the ways followed in eliminating contradictions between verses. In the modern period, some scholars claim that one of these methods, abrogation, is directly related to the Mushkil alQur’ān, and they explain that naskh is applied when the contradictions between the verses cannot be interpreted. This assertion, made in modern times, that naskh is a method that scholars resort to when they cannot remove the impression of contradictions between verses, is closely related to the definition, essence, and content of the Mushkil al-Qur’ān. In this context, it is crucial where the ways/methods used to follow the nature-content pendulum while eliminating the counterparts of the terms and the impressions of contradiction. This is because the acceptance of naskh as a contradiction solution stems from the fact that it is one of the ways to prove that there is no contradiction in the Qur’ān from the perspective of fiqh, and naskh means that two contradictory provisions were valid at different times. The contradiction arises when it is claimed that these two provisions are valid at the same time.