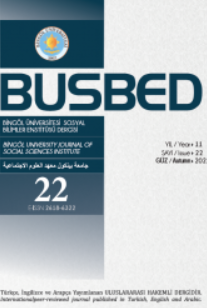 Summary/Abstract: Language researchers generally name the literary language used primarily on Anatolian geography between the 13th and 15th centuries as Old Anatolian Turkish. Many works were written during this period when the Turkish spoken in Turkey emerged. One of them is the Mahabbetnâme, the religious-mystical work of Yusuf Hakîkî Baba. Yusuf Hakiki is a Sufi poet and writer who lived in Aksaray in the 15th century. Mahabbetnâme is a work that appears with its unique aspects besides the skillful handling of religious-mystical subjects and the features appropriate for the general grammatical structure of the period. In this study, the work was examined in terms of grammar features with a descriptive method and the grammatical rules of the work were tried to be revealed with examples and paid attention to its similarities and differences with the Turkish spoken in Turkey at present. Many works naturally have the characteristics of the period in which they were written. For this reason, although having similarities with other works of the period, each work has its specific characteristics. Mahabbetnâme is a work that has the features of its period and itself as well. This study examined Yusuf Hakîkî Baba's Mahabbetnâme in terms of sound and morphology, and the aspects of the work fit the characteristics of the period, and the different aspects of the work were tried to be revealed.