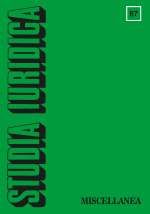 Summary/Abstract: Roman authors demonstrated this hierarchy-oriented approach already when talking about the very establishment of Rome by Romulus, who divided then the foundational community into social orders of patricians and plebeians. Rome begins not with the individuals entering into a kind of social contract but with the pre-existing community. This community is granted with new identity with establishment of a specific order, that allowed addressing all the needs of the community and provided it with significant potential for expansion. Both social orders were burdened with the duties of mutual care and the specific duties towards Roman community itself. Therefore, the social relationships were understood in terms of duties and not rights. In order to provide for proper functioning of this social system, special institutions were established. Among others, that were described, particular attention was paid to Censors being in charge of supervising appropriate moral conduct of the citizens. The Censors exercised control over the way in which the citizens performed their moral duties, i.e. whether they have been observing mores (socially accepted patterns of conduct) in social life. Requirements stemming from the mores depended on the social position, and the higher the social position was, the greater were the requirements towards a given citizen. Censors could punish a citizen who had violated mores, with a censor’s note (nota censoria). The effect of the censor’s note were diverse and could entail severe consequences ending with exclusion from the community which resulted in deprivation of citizenship (capitis deminutio media).