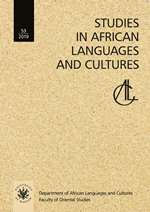 Summary/Abstract: The article deals with the influence of words of African origin on the formation of American English [AE] word stock. It provides new interpretation of Africanisms and shows the significance of this part of vocabulary in determining the characteristics of the American culture. The investigation is based on the existing sources (mainly lexicographic works) and is aimed at their new structural and functional analysis. As a result of the research, it became clear that most of the words of African origin were introduced to English spoken in America in the 17th century and some in the 18th and 19th centuries. The number of words and expressions from African languages that were introduced was closely related to African Americans’ way of living, their spiritual believes, rituals and attitudes and various objects used by them such as weapons. The word stock of the English language was enriched due to the assimilation of loanwords from languages of Africans living in America. A significant contribution to AE is the great amount of words naming animals, fruit, foodstuff, names of states, rivers and lakes, cities and towns.