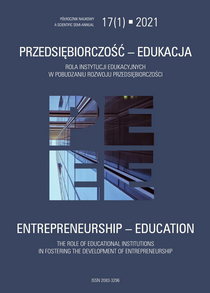 Summary/Abstract: The article deals with the issues of changes taking place in modern economics. The authors argue that the economy is humanising and is looking for a new order in creating socio-economic development. First, the authors define the conditions of contemporary capitalism. Its features are presented in the context of the phenomenon of globalisation. Next, the issue of the cost of constraints of capitalism is introduced. The essence of the article is the issue of prosociality in the capitalist economy in the light of paradigm changes in the economy. Introducing the aspect of prosociality is associated with a paradigm shift in economics. In this context, social enterprise and social market economy were presented as a direction of changes in the perception of the market and economic activity. As the authors point out, the increased role of prosociality in the economy will weaken the existing conflicts in social and economic life, may contribute to the reduction of tensions in capitalist production relations and, at the same time, to the systematic reduction of the costs of the global economy and social life.