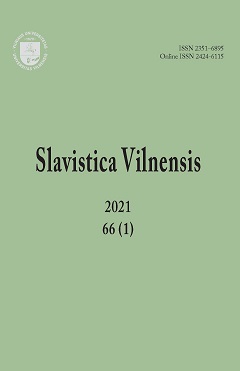 Summary/Abstract: The article, based on a variety of ethnolinguistic material, especially folklore texts, aims to reveal the main similarities and differences in the interpretation of the image of the magpie in the ethnic culture of Lithuanians and Slavs. This bird in two traditions, in Lithuanian and in Slavonic, is treated ambivalently, more often negatively. This is due to the peculiarities of the bird’s appearance, and in particular the variegation of its plumage. This characteristic feature in the ethnic culture of many peoples is traditionally associated with evil spirits. Too talkative people, most often women, are compared with this bird. Common is the motive of the thief magpie. The name of the bird in all the languages is feminine, therefore, in both Lithuanian and Slavic mythopoetic texts, the social roles of a peasant woman are attributed to it: a daughter-in-law, a mother, a hostess, a cook, a nanny. Another common feature is the image of a magpie as a sorceress, herald of good or evil news and future events. These functions are associated with the tendency to depict witches and other mythical characters in the form of a magpie. The most striking differences in the interpretation of the magpie are the following ones: it is unusual for Lithuanians to associate the idea of procreation with it, and some Slavs (for example, the Czechs) believe that magpies bring children into the house. Lithuanians are also unaware of some features of the “working” behavior of a magpie, for example, the threshing motive. In their turn, Lithuanians attribute such crafts as shoemaking, brewing, and agriculture to magpies.