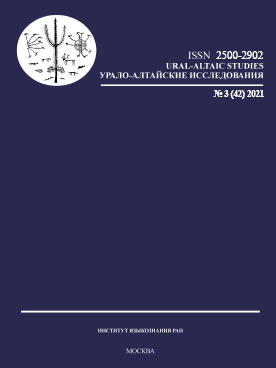 Summary/Abstract: The article is devoted to the study of the term and ethnonym Qazaq / Kazakh, which is the ethnic name of the main population of the Republic of Kazakhstan. The article suggests that the term Qazaq comes from the Turkic verb qaz- ‘dig’. Perhaps this term meant young Turkic people who switched to qazaqliq (free, or qazaq style of living), and, unlike the nomadic Kipchaks, used to live not in yurts, but in dugouts that they themselves dug up in forest and mountain ranges. The following stages in the development of the term qazaq / Qazaq in East Desht-i Qipchaq of the 13th—14th centuries are highlighted. 1. In the 13th — the 2nd half of the 14th century, the word qazaq was applied to unmarried young people who temporarily broke off ties with their relatives and went to remote places, where they passed a kind of a school of survival. The term qazaqliq denoted the custom of “bravery and courage”. 2. From the 2nd half of the 14th century to 1465, in East Desht-i Qipchaq (and in the former Chagatai ulus) the word qazaq was primarily applied to Chingizids, who in the conditions of political struggle were forced to abandon their original possessions and take up the qazaqliq. The term qazaqliq denoted the method of political struggle, widespread among the Chingizids, as well as the custom of “bravery and courage” as before. 3. From 1465 to the end of the 15th century, with the foundation of an independent state between Shu and Ili rivers, their neighbors began to call its subjects Qazaqs, and the term became a politonym. 4. From the end of the 15th century until the middle of the 16th century, the ethno-political division of Uzbek Ulus took place. Three ethnopolitical communities originating from Uzbek Ulus emerged: Nogai, Shiban Uzbeks, and Qazaqs. During this period, the term qazaq became an ethno-politonym. 5. From the middle of the 16th century till today, the terms Qazaq / Kazakh and Аlash began to reflect the selfidentification of the population of the Kazakh Khanate, Kazakhstan, and the term Qazaq / Kazakh has acquired an ethnic meaning and started to be used as an ethnonym to refer to the population of the Kazakh Khanate.