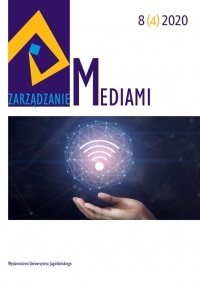 Summary/Abstract: In this paper the author has analyzed the phenomenon of investigative journalism in social media on the example of Tomasz Sekielski, which was defined by the author’s term “social media muckraking”. Muckraking, which dates back to the so-called “golden age of journalism” in the United States is one of the most ennobling terms for investigative journalism. The proposed term is the result of observing the increasingly popular practice of using social media in the work of an investigative re­porter also in the context of increasing publicity of the pedophile theme among priests, which was presented in the documentary film Do Not Tell Anyone. Therefore, social media content analysis and case study were used. As a result of the analysis, it was found that the activity of Tomasz Sekielski reflects the nature of the concept of “social media muckraking” which is one of the possibilities of practicing investigative journalism in the era of new technologies.