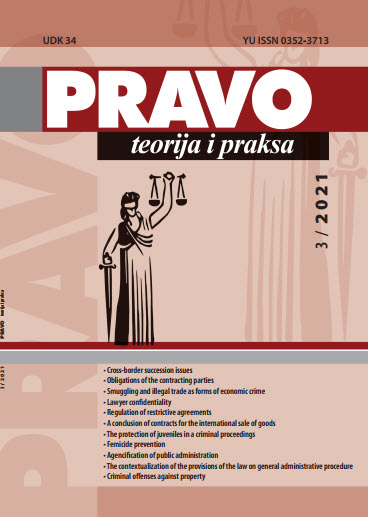 Summary/Abstract: In the modern society, domestic violence is a socially unacceptable phenomenon. The most common form of domestic violence is the violence against women, while as the most severe form of violence against women singles out femicide - a gender-based murder. One of the measures taken by Republic of Serbia in order to reduce domestic violence is the adoption of the Law on Prevention of Domestic Violence. In order to prevent femicide, the most important innovations provided by law are urgent measures imposed by the competent police officer; a mandatory risk assessment of recurrence violence; a mandatory coordination and cooperation between the competent services and case records violence. This paper analyzes not just criminal and family law measures providing protection from domestic violence, but also the results of the application of these measures in the context of femicide prevention.The democratization of the countries in Central and Eastern Europe (CEE) has also included the reform of inefficient public administration. At the same time, these reforms have been accompanied by the aspiration for a membership in the European Union. The administration has been transformed according to a number of principles that make up the framework of the European administrative area. Along with these processes, there were established public agencies, a body taken over from the developed countries, and created during the reform of the New Public Management. The countries in transition have gone through an extensive and rapid process of agency. Due to a high level of autonomy after the formation of agencies, i.e., after certain tasks have been transferred to their competence, it is difficult to eﬀectively control their work. The public interest is threatened by the non –transparency of these bodies. Their existence also aﬀects the basic principles of the European administrative space and turns the reform against itself. It is certain that the mass establishment of a new body in the system of public administration brings uncertainty in terms of eﬀects. It has turned out that foreign experts, without knowledge of the administrative tradition of the socialist countries, as well as domestic politicians who wanted accelerated reform, also contributed to that.