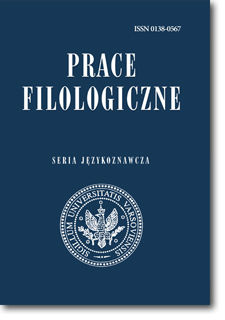 Summary/Abstract: The paper discusses the Polish-Russian parallel corpus that is being developed as a common project of the University of Warsaw, the National Corpus of Polish, the Russian National Corpus and the Akmulla Bashkir State Pedagogical University in Ufa. The corpus encompasses mainly literary texts, including the 19th-century literary classics, as well as contemporary press articles, legal and informative texts. Text annotation system and search engines are based on the software and tools developed for the two respective national corpora. The search engine’s interface draws from the Russian model, renowned for its user-friendliness. It enables queries concerning word forms, lexemes or any realization of grammatical categories, the Polish material being fully disambiguated, while the Russian data only partly. The project’s aims – apart from applications typical of parallel corpora, e.g. in translation studies and foreign language teaching – involve depicting the “loci communes” of the Polish and Russian collective identity (mirrored in culturally-embedded texts), the two neighboring societies and language communities that have not nonetheless been constantly in close relations. The current volume of the corpus permits us to formulate a preliminary assessment of the theoretical assumptions. The corpus has already enabled its users to compare the functioning of analogous grammatical categories, e.g. the Russian infinitive used as imperative and the Polish non-distinct imperative, or to depict cultural differences reflected in pairs of words being “false friends,” like {kolega} and {товарищ}.