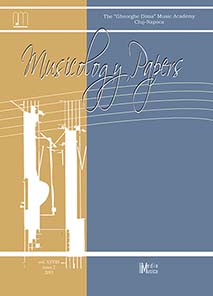 Summary/Abstract: The archetypal relationship between music and artes dicendi (grammar, rhetoric, dialectic) leads us to the reinterpretation of the contemporary terminology we use in musical analyses. After the disappearance of the rhetorical disciplines from the educational and philosophical systems, the 19th century combined Koch’s musical rhetoric and grammar into a single entity, musical structure, while the 20th century rediscovered rhetoric. Therefore: to what extent does music rely on rhetorical concepts nowadays? In rhetoric, the system used for the organization of arguments (form) is dispositio. Tropes and figures are rhetoric ornaments of style (elocutio) or – according to Johann Mattheson – elements that define elaboratio and decoration. The taxonomy of figures has preoccupied many important researchers, among them Burmeister (1601-6), Kircher (1650), Mattheson (1739) and Forkel (1788). From the meanings attributed to it by Quintilian (“any form in which thought is expressed” or “a rational change in meaning or language from the ordinary and simple form”), figure is now considered “a set of detailed discursive operations”, “a means of calling attention to the message, characteristic of the poetic function, ensuring the visibility of discourse” (T. Todorov), “a gap between sign and meaning” (G. Genette), outlining “the semantic space between figurative and literal” and carrying an “added meaning” due to its connotative value which “neutralizes vertically the linearity of the discourse” (O. Ducrot, J.-M. Schaefer). In structural analytical terms, the concept of musical figure has only come to the attention of form analysts during the last century, being attributed two fundamental meanings (cf. Vasile Herman): that of cellular structure, carrying expressive latencies (cf. Valentin Timaru), and that of “unit of discourse [...] designating a relatively small rhythmic-melodic design, with little rhythmic and melodic emphasis and an increased propensity for repetition and sequencing” [1], playing a “connective role in the musical discourse” (cf. Valentin Timaru). In the context of this semantic ambiguity, our investigation will search for arguments for the harmonization of the terminological meanings.