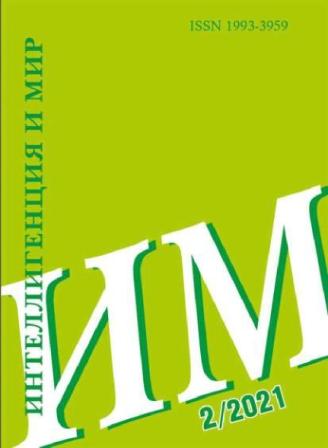 Проблемы становления системы народного образования Иваново-Вознесенской губернии в конце Гражданской войны и на начальном этапе НЭПа (по материалам газеты «Рабочий край» 1921—1922 гг.)
Problems of the formation of the system of public education in Ivanovo-Voznesensk province at the end of the Civil War and at the initial stage of the NEP (based on the materials of the newspaper “Rabochy Krai” 1921—1922)

Summary/Abstract: The motive for considering the history of national education of the region is the similarity of processes, their sequence and logic of the development of the phenomena in the education system in the first five years of Soviet power and in the post-Soviet period, in particular at the turn of the XX— XXI centuries. The historical experience of more than 100 years eloquently shows that disregard for the problems of the national education system at all its stages inevitably leads to the degradation of the foundations of citizenship and statehood, releases and stimulates the processes of the threat of loss of the population’s sense of national identity, sense of their homeland and its security, blocks the movement forward. In scientific terms, the problem of the daily life of teachers of the Soviet formation in Ivanovo-Voznesenskaya province during the Civil War and the NEP has not been touched upon by domestic researchers. The initiatives of a number of young researches to address this topic in regional historiography through their dissertation works have not gained support or understanding in scientific circles. Moreover, judging by the dissertations of second decade of the XXI century, there has been lack of scientific interest to the topic. The source base of the publication is the materials of the provincial newspaper “Rabochy Kray” for 1921—1922, the leading print organ of the Upper Volga region. This approach to the source base of the article was carried out by the author deliberately, so as not to be suspected of biased selection and interpretation of the data presented in the work. The subject of the study is to show the general state of the public education system in the region, in particular, the dynamics of the network of educational institutions and its impact on the economic and moral status of the teachers in the city and village. The aim of the study is to give a historical and statistical sketch of the process of the birth of the Soviet labor school and its impact on the social status of the teachers of the city and village during the transition from the Civil War to the NEP. To consider the subject of the study, the traditional methodology of narration and analysis of the factual material is used. It is based on a materialistic understanding of the essence of social phenomena and, in particular, on their most important component — the system of public education. Its basic principles are historicism, consistency and objectivity in showing the historical environment, the specifics and quality of the essence of the subject of research in it. Methods of approach to dealing with problems: descriptive, historical and comparative — allow to stick to historicism in describing the flow of events, to create a background atmosphere of those years; analysis and synthesis of the actual material allow to deepen understanding of the content of the text and bring to the level judgments and generalizations; experimentalstatistical methods group contributes to the analysis of quantitative parameters of the content of the problem) Based on the results of the study, the following conclusions were made. The revolutionary defeat of the basic foundations of the national system of public education in these years was not accompanied by the replacement of analogues that are adequate in scale, effective in results and that could consolidate the civilizational essence of Russian society with their content. The process of formation and functioning of the Soviet education system went through destruction, against the background of which the constructive and deconstructive plans and actions of the authorities led to a crisis of the entire structure of public education and, in particular, to the squalor of the social status of the teacher, educator and educator. The intelligentsia, represented by the teachers, by virtue of its organic connection with the deep strata of the people, sought to overcome the “cultural gap” that had arisen between the proletarian-class attitudes imposed by the authorities and the national needs for education. The teachers in the daily practice of their activities sought to preserve the continuity of communication in the transfer of knowledge and moral principles to the younger generation. The ruling regime initially adopted a cautious, moderately neutral strategy of behavior in relation to teaching, supporting in words, but forgetting about the elementary help for the survival of the structure of public education, its subject, the carrier of knowledge and eternal spiritual values-the teacher. This approach of the authorities, which has become a frozen stereotype for many decades in the field of education, was also pushed by the current political and economic situation, the behavioral model of the ruling regime for survival in these years.