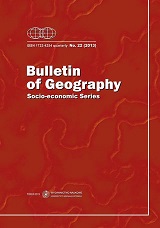 Summary/Abstract: Towns constitute 9% of the settlements of Hungary and represent 68% of the population. This value roughly corresponds to the European Union average. Their number, however, considerably grew in the past decade. While in 1980 there were 96 settlements with town status in 1990 there were already 177 and at present there are 324, which is more over three times more than in 1980. Nevertheless, there are significant differences in their size and scope of activities. Several researches have been conducted concerning the urban fields of many settlements and larger territorial units in Hungary but there no comprehensive map of the urban fields has been prepared yet. Inter-settlement relations started to play a more and more important role in the economic life of the country. The paper focuses on the study of the urban fields of the towns situated along the borders of Hajdú- Bihar county pointing out those functions whose attractions remain within the administrative border and those which cross it. The studied area are the towns along the county border. A special methodology was used which could be used for other regions and towns in other countries