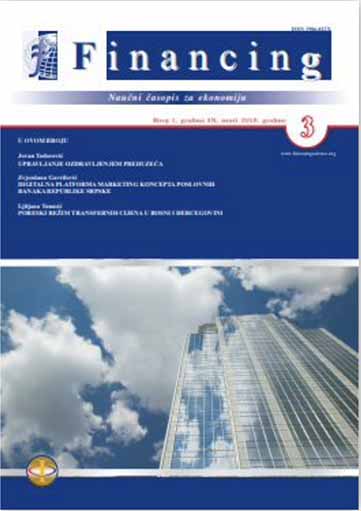 Summary/Abstract: This article analises,on one side, main source of the liquidity in monetary system and balance sheet of central bank in developed market economy as net foreign liabilities (own foreign money and gold and securities in foreign currencies) and net government credits and cash (domestic currencies) in circulation and other assets item. On another side,when central bank in Currency board arrangement (CBA) has sole right to provide domestic currency it can be done with creating level of money in circulation with determination quantity or price of reserve as a instrument of creation the liquidity. The most diferencies which are important for creation the liquidity between two mentioned monetary systems are connected with impossibility of giving the credits to commercial banks from central bank in Currency board monetary arrangement with respect to absence function central bank as lender of last resort.

LIKVIDNOST BANKARSKOG SUSTAVA U UVJETIMA VALUTNOG ODBORA U BiH LIQUIDITY OF THE BANKING SYSTEM IN THE CONDITIONS OF THE CURRENCY BOARD IN BiH 2021
2022 © CEEOL. ALL Rights Reserved. Privacy Policy | Terms & Conditions of use
ICB - InterConsult Bulgaria core ver.2.0.1201