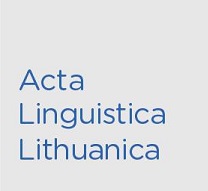 Summary/Abstract: The Lithuanian hydronyms of the type Anatà, Anýkštė etc. have traditionally been explained on the basis of a root PIE “*en/*on” (in modern writing PIE *h1en(H)-), which has standardly been given the meaning ‘flow, river’ vel sim. This root cannot even be found in Pokorny’s Indogermanisches etymologisches Wörterbuch [Indo-European Etymological Dictionary] (1959). Not even since then have researchers succeded in documenting that root in the appellative lexicon of any of the Indo-European languages without doubt. Moreover, there aren’t even any sure continuations of that root in the onymic lexicons of those languages. All names put forward as arguments can either be explained based on a root PIE *pen-/*pon- ‘swamp, (standing) water’ (because they are Celtic) or from a root PIE *h2en- ‘haul (water)’. The application of the methodological means called ‘Occam’s razor’ leaves us no other possibility but to explain all regarding names from these two roots – as long as no proof of an appellative use of a root PIE *h1en(H)- can be offered, which moreover might finally give us a hint, what that root might have meant.