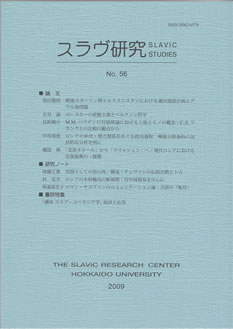 実践としての知の再／構成 ―― チュヴァシの伝統宗教と卜占 ――
Re-/Construction of Knowledge as a Practice: Traditional Religion and Divination of the Chuvash

Summary/Abstract: In an attempt to ascertain the current tendencies of religious movements in the world, it is inevitable to distinguish between two different types of phenomena. The first type is religious activity based on people’s knowledge as habitus. This type of knowledge is embodied by people almost unconsciously due to circumstances from their childhood. The knowledge as habitus is usually merged into everyday life, and affects people implicitly. Conversely, the second type of activity is based on knowledge as facts, which has been defined from a reflective point of view. Knowledge as facts is defined explicitly in a scientific manner. It usually serves abstract and rationalistic purposes, such as in ecological or nationalistic endeavors. Regarding the matter of cultural change including religious consciousness, it is often said that knowledge as habitus gave way to knowledge as facts in the course of modernization. However, such a generalization by no means captures the complex dimension of practices of people. I will elucidate this point by examining the religious phenomena of the Chuvash, a Turkic people of the Middle-Volga basin. First, I will illustrate how the Chuvash intellectuals, who devote themselves to a nationalist movement, have tried to revive the traditional religion. The Chuvash traditional religion has a pantheon of gods and spirits composing various strata of the celestial world. The Chuvash people held onto their indigenous beliefs until the mid-19th century, when the Orthodox Church promoted systematic Christianization among them. Their beliefs were lost almost completely by the time of the Russian Revolution. Later, since perestroika, Chuvash intellectuals, in a nationalist mood, have paid most of their attention to the pre-Christian indigenous beliefs. This has been adequate for promoting a national identity, because it clearly distinguishes the Chuvash from both Orthodox Russians and from Muslim Tatars. The illustration shows how the religious knowledge has been transformed from habitus to facts in an attempt of the Chuvash intellectuals to revive their traditional religion.Next, I will turn to the divination of the Chuvash. Diviners had a close relationship with the Chuvash traditional religion. During the pre-Christian era, diviners appointed dates, places and sorts of offerings to be sacrificed on the occasion of the communal rituals. As the power of traditional religion was lost, the social role of the diviners was diminished. But it has not been lost completely because the divination process remains, and serves to counsel individual clients for whom diviners indicate the reasons and solutions for misfortunes. Although the divination was excluded by both the Orthodox Church and the Bolshevik Party, in the same way as the traditional religion was excluded, the diviners are still in large demand today. This makes the divination a marked contrast to the traditional Chuvash religion.