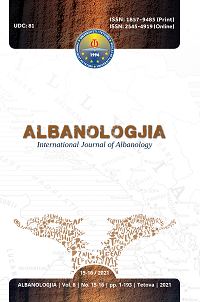 Summary/Abstract: During the speech, the syntagmatic relations between the words make possible the full display of the semantic potency and their enrichment. The full actualization of the potential meanings of word language becomes possible only in their use in different contexts. One of the most optimal contexts of their use with all the semantic force they have is poetic discourse. The semantic contrast of words is one of the best, most productive ways of semantic unfolding of the word. In our paper we will try to highlight the lexical power of words in oppositional use with each other, this in the poetry of Podrimja and Mehmet. Our study approach will be focused on several aspects such as the theoretical view on antonymy; contextual antithetical relations in poetic discourse; antithetical grammatical relations; relations of antitheses due to semantic-syntactic relations.The forms of display of antitheses are evidence of the stylistic force of this linguistic phenomenon, as one of the most productive ways of semantic-lexical enrichment of language. Theoretical view on antonymy as a semantic-lexical and stylistic phenomenon, analysis of the poetic material of A. Podrimja and D. Mehmeti in terms. The aim of the paper is to highlight the stylistic-semantic force of antonymy in a language, as well as to point out that poetic discourse is one of the beginnings of the birth of the first structures of antonymous use of the word and semantic and lexical enrichment of the word. The paper also aims to identify ways of forming antonymous structures.