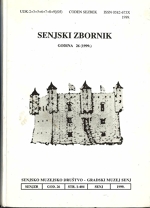 Summary/Abstract: Forests and forestry of a part of the Croatian littoral Karst, going from Povila to St. Magdalene, had a great importance in the entire life on that area during the 19th and 20th c. The outstanding position at that time was entitled to a special forestry institution for Karst managing, called the "Royal Inspection for the Afforestation of Military Border Karst - Inspectorate for the Afforestation of Karst, Bare Rocky Grounds and Flood Control". By analyzing in details all the segments of the continuous activities from the 1878 - 1942, its importance has been objectively evaluated in the context of either forestry or the whole life of our homeland. The achievements of the above institution have been successfully applied in works on the Karst even at present and will be so in the future as well. The special Karst Institution was covering some 51.777 ha, where were established 95 crop areas - forest preserves on 10.097 ha. In those areas some 1.738 ha were wooded and 1.441 ha complemented while 7.435 ha were renovated spontaneously. In their own nurserygardens were produced 82.724.368 pieces of seedlings, mostly for their own requirements, but also for the afforestation throughout the country. Beside the afforestation as a main occupation, a great deal of breeding and technical works of less intensity were performed as well. For the realisation of 25 different kinds of works and for the salaries of the staff was spent 33.027.000. dinars. In the forester's trade, the history was the one which was investigated less of all until now, although it may in a great deal help in exploring the pattern of forestry development. Based on such conceptions much better results with much less expenditures could be achieved in the future managings. The investigations on a continuous 64 years old activities of the Inspectorate of Senj have ranged Senj in an important centre of our Karst forestry.