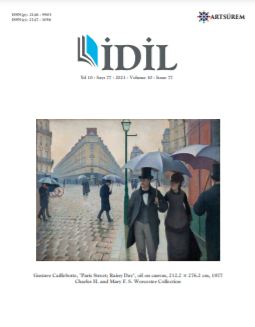 Summary/Abstract: The aim of this study is to analyze Carl Czerny’s etude book Op.849, 30 Études de Mécanisme, which is widely used in piano education, and to reveal its technical gains and to create a guide for piano educators and students about this book. In this qualitative study, document and content analysis techniques were used. Based on Czerny’s handling of correct playing under the titles of nuances, articulations and tempo, document analysis criteria were determined, and then the studies were examined and interpreted one by one in terms of these three elements and their changes. At the same time, some quantitative data obtained were evaluated descriptively. As a result, it was seen that the composer designed the studies in this book within a certain program in terms of nuance, articulation, and technique, and it was understood that he prioritized not ignoring musicality while performing technical studies. It is thought that this study can be taken as an example for the document criteria in analyzing Czerny’s other study books, as well as a guide for those who want to perform these studies and especially for piano educators.