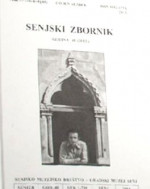 Summary/Abstract: Prof. Glavičić with an all encompassing reflection of his primary area of interest - Senj and its surroundings and Velebit – considered the presence of man as its inseparable part. Visiting these areas and the people throughout his entire working life, he wanted to preserve the memory of the way of life and encourage the interest of the profession in the still living settlements, the existing buildings and the way of building. Almost 30 years of collaboration both in Senj and Velebit as well as on the island of Cres resulted in the systematic study of house building and the life of the people in the area of Podbilo and parts of Northern and Central Velebit, in the period from 2000 to 2002. A number of settlements, ponds and wells were visited. The memories of the rare remaining populations were noted during the visits about the former way of life and construction and thearchitecture of the buildings was recorded in the most authentic condition. Based on these common, and numerous following field trips, a book was put together by the author of this contribution: Velebit arhitektonski, Pučka gradnja u dijelovima Sjevernog iSrednjeg Velebita (Velebit architectural, house building in parts of Northern and Central Velebit), dedicated to professor Ante Glavičić.