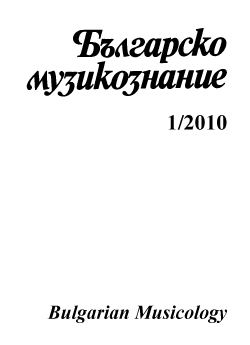 Summary/Abstract: In the three main fields, in which he has worked – compositional, pedagogical and social, Dimitar Tapkoff left lasting traces. He became well-known since his very first appearances in the late 1950’s and early 1960’s, establishing a reputation as one of the most erudite individuals with exceptional qualities of an artist, as a talented musician with his own individual style. Since the beginning of his career he has received a general social recognition. Tapkoff’s ability to recreate the most significant problems of the day has become one of his strongest features as an artist: it is not a coincidence that he’s been called “an artist of the contemporary reality”. The recreation of folklore, for example, has been transmitted in a synthesized way: without the use of folkloric citations, the composer has achieved a Bulgarian sound colorfulness by implying archaic (in its content) folklore, in classical coherent musical forms, such as in his Sketches of Folk Songs for String Quartet (1957–1958). His mastery to perfection of the expressive possibilities of musical language for suggesting a specific idea has been recognized: he himself is playing a number of instruments such as violin, clarinet, harp and flute. Acknowledged is also Tapkoff’s special affinity for timbre and orchestral color: his preference for acute timbre thinking is amongst the hallmarks of his style. Finally, his sense of form proportions, in which he creates the work, has been recognized as well as his finesse for detail. For Prof. Dimitar Tapkoff fully applies the maxim “Life dedicated to work”.